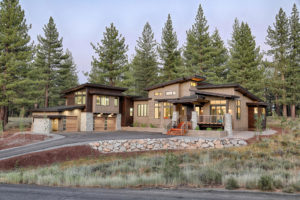 Rumors of dramatic downturn in the performance of Tahoe Truckee real estate have been overstated. While conditions have slowed in relation to the extraordinary performance of the last few years, results are far from disappointing when viewed through a longer lens. As year-end comes into focus, a more definitive picture of 2019 becomes more evident.

With two months to go, the total number of residential transactions compares favorably to many 12-month periods in the recent past.

As well, values have held up well relative to historic performance:

The slight, 2% drop in median price year-to-date can be attributed to the relative absence of certain transactions in the luxury space. While there is little doubt that market saturation plays a part, a dearth of quality supply in certain communities is a co-conspirator in weakening results.

Much has been written in recent months about disparate tastes among generations in the style and function of luxury properties now being handed down from Baby Boomers to Gen X.  The Tahoe version of this may not involve working ranches but rather aging, traditionally designed mountain homes that don’t meet the taste of today’s consumers. Instead, properties of a more contemporary design in highly amenitized communities have stolen the thunder of the quintessential mountain cabin.

Evidence of this trend can be found in the prominence of Martis Camp in relation to traditional Tahoe lakefront properties:

As well, the ratio of luxury homes (defined as $1,000,000 and above) sold in lakeside communities (generally considered to be more traditional in design) compared to Truckee neighborhoods (broadly comprising newer, amenitized resort communities) has continued to skew in favor of the latter.

The community of Gray’s Crossing exemplifies this trend. Launched into the peak of bubble hysteria in 2004, no local community rode the wave of the recession more acutely. In the near-decade since, Gray’s Crossing has been on a steady upward path based upon the availability of high-quality, contemporary homes at prices that offer a relative value other, sometimes more dated, legacy communities. 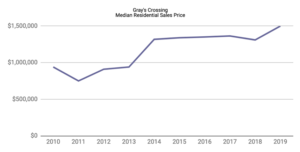 As consumers become increasingly fickle, the availability of product within these resort communities will become a major influence on the productivity of the regional market in general. Heading into 2020, more abstract roadblocks including the inevitable stasis of an election year may be convenient excuses for consumers waiting on product that most keenly meets their tastes.

The last two months of 2019, though historically among the slowest of any given year, will give a strong indicator of conditions to come. With cold, if clear weather, pre-winter shoppers are giving every indication of ongoing demand for great mountain properties.