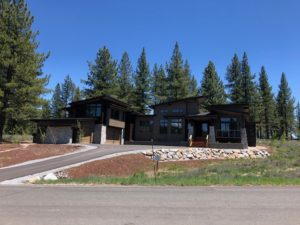 On its surface, the Tahoe-Truckee region has lagged behind the performance of 2018 by meaningful amounts. When heavy snowfall caused road closures throughout much of February, many would-be real estate consumers were forced to delay purchasing decisions creating a fairly sizeable Q1 lull for real estate transactions. Inevitably, some of these visits were perishable, lost until next winter while others were simply deferred into Q2. In May, total residential transactions trailed the previous year by 10% while average price fell by a more meaningful 15%. Conversely, median price rose 3% giving a clue to some statistical aberration that has skewed the overall market data.

A side-by-side comparison of May, 2018 vs May, 2019 shows the variance to be entirely within the community of Martis Camp. Martis Camp has been the goliath of Tahoe-Truckee real estate accounting for up to 25% of the region’s total sales volume in recent years. In fact, Martis Camp had eclipsed Tahoe lakefront property as the bell weather for luxury in the region measured in both the total number of premium transactions and the average sales price over much of the last decade.

This begs the question as to whether this 30-day period represents a shifting trend or is simply an anomaly in the otherwise storied performance of Martis Camp. Historically, May is a meager period for closings given the lack of buyer activity in late spring. As with the rest of the Tahoe-Truckee market, activity in Martis Camp will pick up in summer and reach its peak in early fall before tapering into winter. Current inventory is modest with 19 available properties; approximately equal to the average time on market over the last 12 months indicating a supply constrained micro-market.

Filling the void, shoppers found greater value in Tahoe Donner which produced 24 sales to just 19 in May 2018 as well as Lahontan and Gray’s Crossing which each saw 2 transactions against zero during the same period in 2018. In each of these communities, new homes were available for $500 (Gray’s) and $800 (Lahontan) per square foot respectively offering fresh product in thriving communities.

In a typical year, late May often produces the vast majority of new inventory in anticipation of the summer selling season. Having emerged from a winter that was anything but typical, the rush of new listings may be deferred until the weather inevitably turns more cooperative. This may result in a less bulky start to the summer and fewer days on market as inventory is introduced closer to the period in which homes typically sell.